Click this link to watch a video featuring Abel's testimony

Abel is the resident Tex-Mex favorite! He was born in El Paso, Texas, but was raised in Los Angeles, California for most of his tumultuous teens. His biggest regret was not knowing his Savior, Jesus Christ, at an earlier age. Many of the consequences of his life stemmed from a broken home and addiction to gang-banging. After years of street living, Abel found himself in Folsom State Prison facing attempted homicide charges. What institutional living couldn’t change, the power of Jesus Christ would. Four years later, he visited Calvary Chapel Montebello with the intention of killing the senior pastor but the Lord grabbed his heart and changed his life miraculously while attending a church service.

The man whose aim was to kill the senior pastor, ironically became a pastor. Abel currently serves and oversees many areas of the church including Prison Ministry, FMO Men’s Ministry, and Hospitality. His biggest success was making peace with God, through which he is now able to witness Christ’s transforming power in the lives of other people. By the grace of Jesus Christ, Abel now enjoys eating his mom’s green chili burritos (which he can’t live without) and spending time with his two grandchildren.

Click this link to watch a video featuring Carlos's testimony

Carlos’ affinity for running is deeper than just physical. He is perpetually running towards the cross each and every day. His love for the Lord can only be rivaled for his wife Katherine and three sons. He finds great joy in serving God’s people as an associate pastor overseeing Children’s Ministry and Facility Maintenance.

After soul searching and seeking peace in a chaotic world, Carlos and Katherine visited Calvary Chapel Downey in 1987, accepting the Lord into their hearts. Both vowed to serve the Lord and raise a family in His ways. Carlos' greatest regret is not continuing with his education; but his regret has fueled a sincere hunger and drive to learn and absorb all he can about God, His people and living a victorious life through Christ. Most people can find him eating his favorite food (beans and chile), fellowshipping with members of the body and laughing heartedly with his fellow pastors.

Click this link to watch a video featuring Derek's testimony

Derek was born in Whittier, California and raised in Pico Rivera for a majority of his childhood. Growing up in a single mom's home, he was one of four kids and was introduced to Jesus at a very young age in the Children's Ministry at Calvary Chapel Montebello. It was here that his foundation and love for Jesus flourished before hitting his teens and fully turning his back on the Lord and going after the love and acceptance of the world.

After moving with his dad and a whole new family in Ontario at the age of 12, he began to indulge in a secret violent drug and alcohol lifestyle. It would not be long before he hit his 20's and his world would be violently shaken by the death of his best friend. Derek's life continued to spiral downhill after that but it led him to a deep conviction by his need for Jesus or spending his eternity in hell. It was then that he obeyed that still small voice speaking to him and returned to his foundation set as child. Derek would then recommit his life to Christ.

Derek loves the youth and sharing his relationship with Jesus with others. He loves and spends his free time playing basketball while listening to music, specifically by 11six clique (a Christian hip hop group).

John Paul was born in Santa Ana, California in 1969. While he was just a boy, his family would relocate to Venezuela, where he remained until he had finished his Marketing Degree and then moved Los Angeles, California to pursue......an acting career. Did we mentioned that he also studied acting at a theater acting academy? Once in Los Angeles, he hope to have a star on the Walk of Fame but little did he know what God had in-store for him.

John Paul married Luisa, his girlfriend from Venezuela and has a beautiful daughter named Sophia. On the 29th of September 2001, while working as a car salesman at a dealership in East Los Angeles, he received news that his wife was pregnant. That was the day he understood that in order to be a good father he needed to be born-again. His passion for action would morph into a passion for Chris and the Gospel. Shortly thereafter, Calvary Chapel Montebello would become his home church. He then enrolled and graduated from Calvary Chapel Bible College and is now serving as a member of CCM's pastoral team.

Click this link to watch a video featuring Loren's testimony

Born and raised in Echo Park, Los Angeles, Loren was exposed to the idea of God in elementary school. Having been invited to attend VBS (Vacation Bible School), he realized at the age of 11 that John 3:16 made a whole lot of sense. As an adult with a strong desire to serve Christ, Loren left corporate America and joined The Ark Montebello as Children's Ministry Director and never looked back.

Loren's encouragement to you? "I have experienced personal loss and disappointments from the age of 16, however, I have never been disappointed by Jesus Christ and His plan for my life! This is my personal hope for you, that you would trust God and what He has for you!" 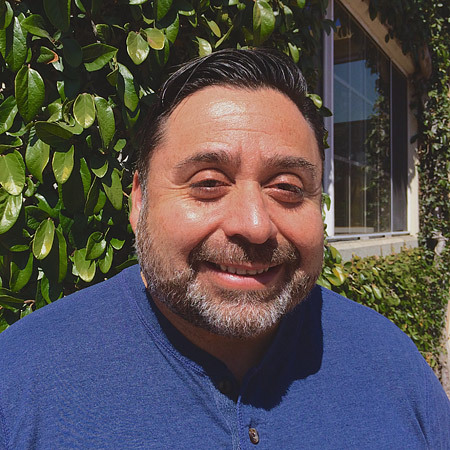 Click this link to watch a video featuring Noe's testimony

Pastor Noé Mendoza was born in the vibrant port city of Tampico Tamaulipas, Mexico. His Veracruzan parents migrated to the U.S. and raised him in the projects of Boyle Heights and Lincoln Heights in Los Angeles, California. He witnessed and was subjected to intense physical and verbal domestic abuse on a daily basis, yet never told a soul. By the time Noé was a teenager, he found an escape in music, concerts, drugs, and alcohol. Although he was raised Catholic, he began to explore various world religions and seriously considered Buddhism.

In his early twenties, Noé asked Jesus into his life after a friend from cabinet making school invited him to Calvary Chapel West Covina (now known as Calvary Chapel Golden Springs). While attending Bible School at Calvary Chapel West Covina, Noé met his beautiful and caring wife Virginia, “Vicky.” Fast forward 27 years later, with 4 children, the fire to serve the Lord at any capacity within the church continues. In addition, the Lord opened the doors for him to finish his college education while being married with kids. He was also employed as a children’s social worker (3) for DCFS in Los Angeles County nearly ten years. Today, God has called pastor Noé back on staff at The Ark Montebello. As he likes to say, “Relax, trust, and obey!” Click this link to watch a video featuring Willie's testimony

Growing up in East Los Angeles, California in the 1960’s, gambling was an innocent past time. Playing things like marbles, flipping baseball cards, lagging coins quickly became a way to profit and slowly his life was all about the “gamble.” Willie learned there was money to be made by his love of sports and soon he gambled on literally everything. So intoxicated with this rush, he had no idea his soul was lost. Having traditional religious values, he perceived that he was okay with God. The 1970’s and much of the 80’s would prove to be a wild time of not just gambling but with alcohol, women, and drugs unexpectedly controlling his life. Nothing satisfied the emptiness in his soul and the downward spiral eventually consumed him. His soul was “bankrupt” and longing for love, due to the lack of a father figure to guide his life. Only the power of the true and living God could free him from this life of bondage.

On June 8, 1987, God called Willie out of darkness and into the light by meeting him at the end of his “luck”. At this point, his girlfriend Barbara and child were ready to leave along with a debt so large he could not repay. Willie dropped on his knees for the first time and asked God if He was real to show him. The power of God came over him and Christ filled, freed, and redeemed him. He was willing to forsake all that he had to follow the call of Jesus. God restored his family and he and Barbara were soon married. Now as God would have it they both serve in the Family Ministry. Since that day, Willie enjoys being chosen by the Lord to help meet the needs of the body of Christ.